Well, after teasing it for a while I guess it’s time to finally announce my next game. Introducing: Chibi Ninja Shino-kun: Treasure of Demon Tower!

Inspired by Japanese ninja games from the 80s such as Kid Niki: Radical Ninja and Ninja-kun: Adventure of Devil Castle, Chibi Ninja Shino-kun: Treasure of Demon Tower is an arcade retro platformer in which you climb a giant tower while dodging enemies, traps and other obstacles. On your quest you’ll use your hookshot to quickly pull yourself to higher platforms and out of the sight of enemies roaming the various floors of the tower.

Unlike my previous project [Speer], Shino-kun won’t focus on puzzles but rather on smooth and precise platforming. That’s not to say that you won’t need to be clever though, as keeping out of sight will sometimes be absolutely necessary. And if you just can’t find a way around some enemies, maybe you’ll find a way to use their own traps against them…?

Chibi Ninja Shino-kun: Treasure of Demon Tower is being developed in HaxeFlixel and will be released whenever it’s ready on PC, Mac and Linux. The game is still in early stages of production so there are plenty of updates coming. If you want to stay in the loop, follow me on Twitter @ohsat_games and sign up for my newsletter below! 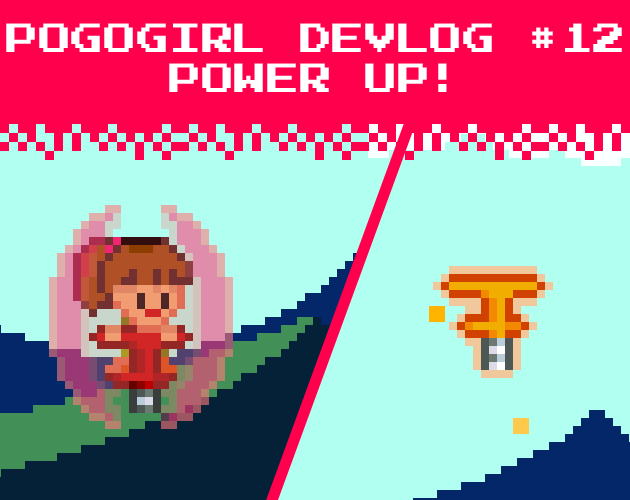 Powerups are a staple of video gaming, and platformers had some of the best around. Sonic’s elemental shields, Mario’s mushroom, Kid Chameleon’s transforming helmets…there’s a lot of good stuff in there. It seemed obvious to put powerups into Go! Go! PogoGirl as well, but for a long time, I wasn’t quite sure what to put in. Powerups need to enhance and support the gameplay; you can’t just throw in anything you want.

Gamedev includes a lot of fun activities, such as messing with physics, making lasers go pew and making stuff explode. However, there is also a lot of dry stuff that you have to take care of. And I’m taking care of that stuff right now, because…well, because I’ll have to eventually! First of all, I’ve modified the menus a bit. So far I’ve been using my own solution to create menus, and while it was a bit hacky, it worked pretty well.